What? Gehazi, with his own eyes, had just seen the mighty Syrian army with their strong horses and chariots surrounding the city where he and his master lived. Gehazi knowing that they were outnumbered and that their defeat and death were inevitable, trembled with fear. He asked his master, “What shall we do?” What Elisha did, is what we are all called to do, especially when fear, panic, and terror arises from circumstantial evidence. Elisha prayed!  And, his Holy Spirit inspired prayer is what we need to pray –  “Open his eyes that he may see” – for others as well as ourselves, if we want to have great expectations and experience great results.

What Elisha did, is what we are all called to do, especially when fear, panic, and terror arises from circumstantial evidence.  Elisha prayed!

When Elisha prayed this for his servant, Gehazi saw “beyond his wildest imaginations” a heavenly army with “horses and chariots of fire” all around that far outnumbered the worldly opposition that stood before his face. Instantly, his demeanor changed. Confidence and great expectations of what God was about to do displaced his fears.

Despite what you see all around you right now in the natural realm, God desires that your eyes be opened to see what He sees and to live with “Great  Expectations,” just as we declared at the beginning of this year.  (See January’s blog)

Unbeknown to us, another ministry much larger than ours also declared 2020 as the Year of Great Expectations. After discovering this in April, my husband purchased a “T-shirt” from this ministry and gave it to me on Easter.  Written on it are these words:

On Easter, who expected God’s 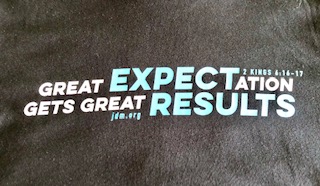 Word to come to pass and Jesus Christ to be raised from the dead? No-one, except God Himself! The impossible was made possible. The unbelievable happened! And, now God wants you to expect the victorious force of Jesus’ resurrection to work in you and through you, causing the life of Jesus to burst forth in the midst of your valley of “dry bones” – the hopeless, beyond repair situations and circumstances – and in the midst of the valley of “dry bones” all around you, as you pray!